Darek Fidyka and the Right to Die 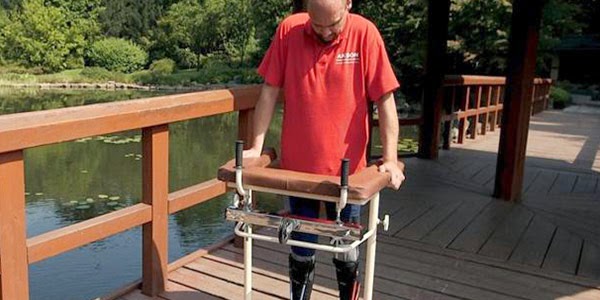 It was announced yesterday in the news that a remarkable scientific medical breakthrough has been achieved, one that has been long anticipated and hoped for. Darek Fidyka, a forty year old man from has started walking again after four years of being confined to a wheelchair. In 2010 he was paralyzed when his spinal cord was severed after he was brutally attacked by somebody wielding a knife. These kinds of injuries often cause permanent disability because damaged nerve cells heal much more slowly than other kinds of cells do. Sometimes they don't heal quickly enough to recover from the injury during the patient's lifetime. For many years scientists have been trying to find a solution to this using several avenues of research; I've written a full-length article on the subject here: http://hpanwo.blogspot.co.uk/2011/02/spinal-research.html. The methods involve using stem cells, electronic implants and much more, and one of those is the trial intervention Darek Fidyka underwent. In this case the scientists removed cells from his nose and inserted them into the damaged area of his spinal cord. The hypothesis was that the injured neurons- the nerve cells in his spine, would be stimulated to heal faster because the nasal cells are very different to other types. They are neurons, but they regenerate far better than the neurons in other parts of the body. Amazingly it worked and Mr Fidyka is walking again. He has also regained sensation of his body below the injury and describes is like being "born again". His rehabilitation will take a while because his muscles and joints need to recover as well, but hopefully he will one day be back to normal. His doctors, Prof. Geoff Raisman of the University College of London and Dr Pawel Tabakow of the Wroclaw University Hospital, have said that they want everybody in the world who needs this treatment to receive it and will devote every penny of funding they earn towards that goal. Prof. Raisman added that watching Mr Fidyka walking again is more impressive than watching man walk on the moon. I agree; I'm delighted by this news story. It must bring so much hope and reassurance to so many. The scientific team behind the project are keen to obtain as much funding as possible so that as many people as possible can benefit from this new treatment. So far the research has been largely supported by charities, including the one set up by David Nicholls, a British man whose son Daniel was paralyzed by spinal injury, and to whom he promised Daniel would one day walk again. I hope what I've just said will stump those who think I'm "anti-science" just because I talk about medical conspiracies.

When I heard about this I immediately thought about another article I wrote a while ago about Dr George Carey, the son of a hospital porter and former Archbishop of . He had taken a radical stance in the church by supporting voluntary euthanasia, see: http://hpanwo-hpwa.blogspot.co.uk/2014/07/carey-backs-right-to-die.html. Euthanasia, a Greek word that literally means "a good death", is killing somebody for the purposes of relieving their pain and/or misery. It's an everyday practice in veterinary work for dealing with badly ill animals; but, as I explain in the background article, it is an extremely controversial topic when it comes to humans. The medical profession is divided on it, as are politicians and ethical philosophers of medicine. This is why it's legal in some countries and not in others. Religious institutions are almost universally against it, which is why I respect Lord Carey for his stance on the subject. Dignitas is an organization that specializes in euthanasia. It is based in and can only operate there because their practice is against the law in so many other countries. People from all over the world have travelled to their clinic in to end their lives peacefully, surrounded by their loved ones and cared for by expert medical staff. Over a hundred and eighty Britons have so far made their last journey to the Dignitas centre including the artist John Hinklenton who had been struck down by multiple sclerosis. The famous writer Terry Pratchett wants to go there too because of his Alzheimer's disease. I myself am very much in favour of voluntary euthanasia and I'm glad the tide seems to be turning that way too. However, the story of Darek Fidyka has given me a moment's pause. This is because of another British "suicide tourism" case that took place a few years ago, this time it involved a young man of just twenty-three. Daniel James from was a keen player and always dreamed of competing professionally and even one day playing for . Then one day his ambitions were instantly and brutally shattered when he suffered a spinal trauma while playing a match and he was left paralyzed from the chest down. He was told his injury was permanent; also quadriplegics and high level paraplegics suffer from a whole syndrome of organ failures and other pathologies that greatly reduce life expectancy. He decided to go to the Dignitas clinic and end his life; his mother and father supported his decision and travelled with him to on his final journey, see: http://news.bbc.co.uk/1/hi/england/hereford/worcs/7774802.stm. I can only speculate, and don't like to, about how Daniel James' loved ones are now feeling if they've read the news story about Mr Fidyka; I can't bring myself to write the words. There's a very poignant scene in one of the Star Trek films, The Final Frontier, where Dr McCoy relates how he gave his own father a mercy killing only to discover that they found a cure for his sickness soon afterwards; it must feel like that and my heart goes out to them. Does this alter the moral equation at all when it comes to assisted suicide, euthanasia or whatever you want to call it? No. I've thought about it a lot and the answer is still no. Daniel James made his decision in 2008, seven years ago; his doctors would have made sure that he was given all the information available at the time about his condition and prognosis, no doubt taking into account upcoming research. The news was released about Mr Fidyka yesterday. It's impossible to know the future. Are people like Terry Pratchett expected to hold their decision just in case some future breakthrough might cure them? If this was always the way then nobody would ever be allowed to go to Dignitas ever. There is hope for Alzheimer's sufferers though from stem cell research, but I'm sure Mr Pratchett knows all about it and has declared what he wants to do despite that. If we make the decision to legalize voluntary euthanasia then it must be done while respecting human rights of intelligent freedom. That means treating us as informed and consenting adults, able to determine the course of their own lives, past, present and future.
Posted by Ben Emlyn-Jones at 19:02