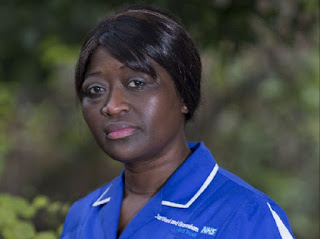 I have a few words of advice for anybody seeking a long, successful, secure and trouble-free career in the National Health Service: Do your job as badly as you possibly can. Make sure you are the laziest and most incompetent shit-bag in your department. Come on duty late every day, skive as much as you can, sneak off early before the end of your shift. Take at least one day off sick a week. If... when... you are promoted to senior management grades, be a total greedy, corrupt, stupid, gutless, destructive and irresponsible bastard. I can hundred percent guarantee the NHS will never sack you. On the contrary you'll go a long way; be contemptible enough and you'll be treated as a favourite. The NHS only sacks people for making videos in their spare time, see: http://hpanwo-hpwa.blogspot.co.uk/2013/01/one-year-on.html, or for being "too honest", see: http://hpanwo-hpwa.blogspot.co.uk/2016/08/nhs-whistblower-branded-too-honest.html. The latest news is another prime example. Sarah Kuteh is a fully-trained and highly experienced NHS nurse. She started nursing in over fifteen years ago and ended up as a ward sister. Since 2012 she had been a sister in the intensive care unit at in . She then received "complaints" from patients... apparently. Complaints in the NHS are anonymous and can be concocted by management; as in my case, see link above. What were these alleged complaints about Sister Kuteh? Was she slapping people around, groping male patients' bottoms or stealing money from their bedside locker?... No. She told patients she would pray for them and even gave one of them a bible... Yes it really is as bad as that!

Sister Kuteh is a devout Christian and regards this as extraneous to her job. However, like all front line NHS staff, patients liked to talk to her about their personal feelings. As far as I'm concerned that is an important part of the healing process. In fact one of her duties was to ask patients about their religious beliefs. This is normal practice for ITU patients, basically for the grim reason that in case they get a terminal prognosis they might request the last rites or something similar. This questionnaire often led to a discussion about religious faith and if the patient was interested in Sister Kuteh's beliefs sometimes she offered to pray for them. However management at the and Gravesham NHS Trust were "concerned" that her "unwanted discussions" were "upsetting the patients". No doubt the words "offensive", "unprofessional" and "inappropriate" came into the conversation at some point. She had received warnings previously that she had supposedly not heeded. As a result she was summarily suspended from duty and escorted from the hospital site, and was forbidden to talk to her colleagues, other than her union representative. She broke down in tears as she described this experience to a reporter. She was dismissed in August and had her appeal rejected. She was not allowed to bring any witnesses to the tribunal. The mother of three children is now suing the trust for unfair dismissal. I can't wish her success enough in her campaign for justice against the deplorable scumfucks who always float to the top in NHS administration. It sounds like a similar case to my own. I'm very concerned at the way Christians are treated in modern society, and this is me speaking as a non-Christian (I'm a lapsed Catholic). It would be regarded as socially unacceptable to treat a Muslim, Jew or Hindu in this way; indeed even atheists are now, quite correctly, asserting their human rights. See the background links below for more examples. Sister Sarah Kuteh is a thought-criminal and a prisoner of conscience. Her enemies are both the NHS and the political correctness agenda. I salute her as a civilian colleague who has been persecuted and expelled because "her relationship with the Trust had broken down" and wish her all the best for the future.
See here for background: http://hpanwo-voice.blogspot.co.uk/2013/01/discrimination-against-christians-2.html.
And: http://hpanwo-voice.blogspot.co.uk/2008/11/oxford-bans-christmas.html.
And: http://hpanwo-tv.blogspot.co.uk/2016/05/andrew-copson-at-greenwich-sitp.html.
And: http://hpanwo-voice.blogspot.co.uk/2012/02/council-prayers-banned.html.
Posted by Ben Emlyn-Jones at 21:12