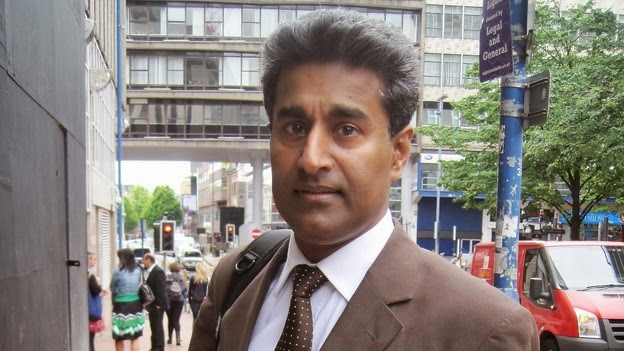 Dr Raj Mattu was a senior cardiologist in the and Warwickshire NHS Trust until he was forcibly discharged in 2010. He has just won his lawsuit for unfair dismissal. His trouble started in 2001 when he reported to the media about the squalid and unsafe conditions cardiac surgical patients were forced to live in at 's . He then believes he was subjected to a witch hunt, a covert campaign to discredit him in any way possible, a "plausible alternative" to their real motive, which was his whistle-blowing. They trumped up some charges against him that he considers very heinous like fraud, sexual harassment, assault, finding flaws in his work etc. If you're a regular HPANWO reader you'll no doubt have found this story as familiar as I have, see: http://hpanwo.blogspot.co.uk/2012/01/how-i-became-ex-hospital-porter.html. I hope Dr Mattu bleeds the bastards for every penny he can get! He should show them no more mercy than they showed him.

This tale really rings a bell with me, the conspiratorial targeting of the individual, the lies tabled in order to blacken their name, to put them under emotional pressure and steamroller them out of their job. It amazes me how difficult it is to get a quorum together at a union branch meeting to discuss positive subjects about improving everybody's lives, yet when it comes to maliciously humiliating and intimidating a colleague, NHS staff in huge numbers will tacitly form a dedicated and loyal united front at the drop of a hat. Dr Mattu says his managers instructed the head of hospital security to spy on him; and the head of security agreed!? Why is that? Maybe it's media indoctrination and cultural programming; would Phil Mitchell hesitate to get Dr Mattu sacked? That's a big subject that will require another article. This whole process took over a decade, far longer than it did with me in which I was manoeuvred out of the door within three months. These days, when every hospital and doctors' surgery in the country is teetering on the brink of bankruptcy, this must have cost the Trust an extraordinary amount of money; far more than they spent getting rid of me. Not to mention the loss of an experienced doctor of consultant level, somebody who costs several million pounds when all his experience, training and education is added up. Yet they paid out the cash without a second thought. There's an important lesson to be learnt here; don't ever think that corruption and secrecy is impossible in the National Health Service because somebody will always speak out. We are looking at a level of internal violence and a climate of fear that even I underestimated.
Source; please also listen to the brief radio clip in the right hand column: http://www.bbc.co.uk/news/uk-england-coventry-warwickshire-27072779.
Posted by Ben Emlyn-Jones at 16:18 No comments: