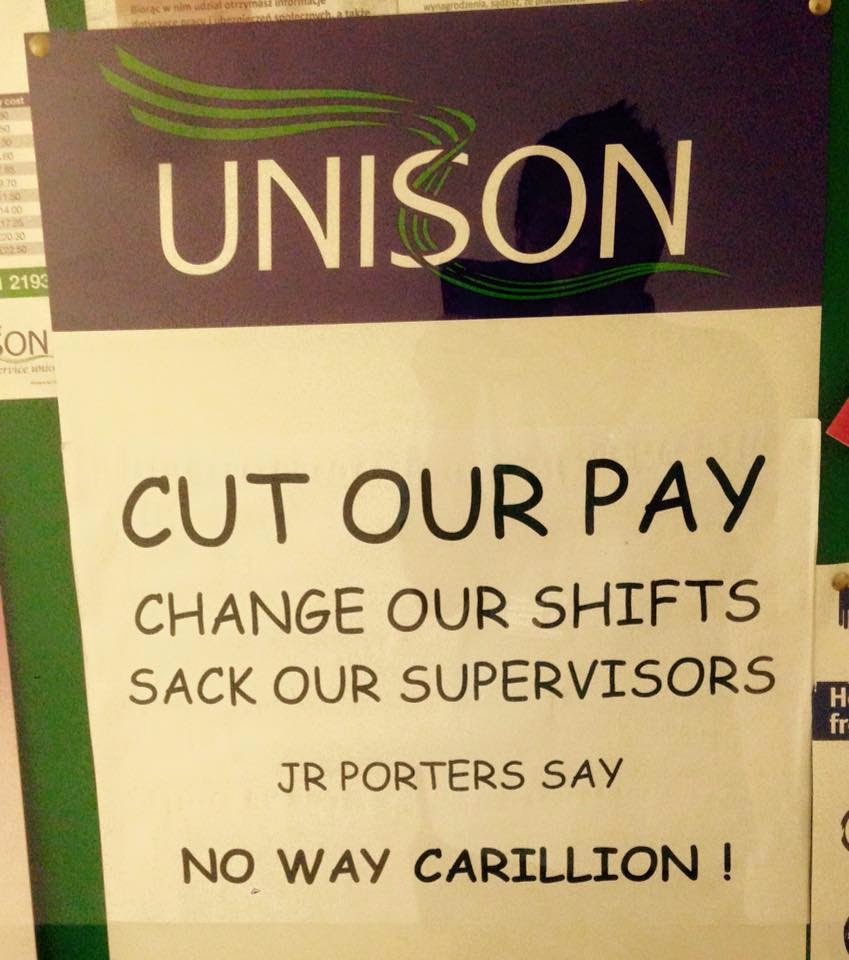 I could write a long and very depressing book about the various and numerous ways the portering service at the has gone downhill since I started out there as a porter in the late 1980's; the background articles below will give you an overview. The malaise experienced by the porters is mirrored in the civilian services too; nursing, medicine, paramedics etc. Just a few days ago a situation emerged which is the inevitable result of this degeneration and anybody in the know who did not predict this disaster is a fool, see: http://hpanwo-hpwa.blogspot.co.uk/2015/04/a-crisis-2015.html. Since my own very suspicious dismissal from the Hospital Portering Service, see: http://hpanwo-hpwa.blogspot.co.uk/2013/01/one-year-on.html, things have got even worse. I am in regular contact with a JR porter who supplies me with news and information from the inside that I wouldn't otherwise be able to know... never mind who... therefore it was no surprise to me when this was published by the local branch of our trade union UNISON, see: http://www.ouh.org.uk/index.php/constituencies/oxford-radcliffe-trust/133-survey-shows-carillion-staff-in-ouh-are-underpaid-bullied-and-exploited. In fact this is exactly what I myself experienced; however the situation has considerably deteriorated since January 2012. (In fact, seeing as now I have a civilian job, food on the table, a roof over my head and all the other essentials of life... how much do I really regret being sacked from the hospital?) Despite UNISON's admirable attempt to improve things with their "Respect" campaign, my contact tells me the abuse of staff as described in the above article still goes on. Just a month ago he informed me that everyone was bracing themselves for some huge bombshell and last week it detonated. I need to explain some background: the JR porters' employment circumstances are very complicated. A company called Carillion plc runs the Facilities departments via a PFI- private finance initiative deal. However the contracted staff are National Health Service employees who are "seconded" to Carillion. A large proportion of the Facilities crew, over a quarter, are not actually employees though, neither of the NHS Trust nor the outsourcer; they are just agency placements who have no contractual rights to the job they do. Despite the constant reassurances that they are just going through a "trial period" and that they'll be offered a proper job if they make a good impression, some agency staff have been at the hospital for over two years in that limbo state; working there, but not really a part of the team.

Now Carillion want to introduce further changes to a service already depleted, demoralized and weakened by upheaval. Firstly they want to axe six senior porter posts, that's the principle supervisory grade; these they aim to replace with two directly-employed Carillion "customer service managers". Secondly they want to end the rotary shift system in which porters take it in turns to provide the different sessions of the twenty-four-seven patient service at the hospital. This would be replaced by a fixed roster of permanent regular shifts; so one porter would work permanent earlies, another permanent lates and another permanent nights, with separate weekend staff etc. This would seriously reduce pay levels; seeing as weekends, nights and unsocial hours are paid at an enhanced rate or with a bonus. It would also reduce a lot of the enjoyment of the work through losing the interest, excitement, professionalism and variety of rotary shiftwork. My contact suspects that Carillion will not offer any nightshifts to the existing staff at all and will instead employ their own night porters directly, therefore not paying them the NHS directed enhanced rates of pay. UNISON have asked Carillion to withdraw their proposal and Carillion have refused. There have been further meetings and UNISON have emphasized how the Carillion proposal will be a detriment to patient care, which it certainly will. Carillion are still digging their heels in, but they have postponed the introduction of the new system. The mood of the porters is rebellious and there will be a strike ballot unless Carillion scraps it completely. Obviously I'm not a porter any more, nor am I a UNISON member; I have no say at all in what happens, but you can guess how I would vote in the ballot if I could. Industrial action in a hospital is a very serious matter. If the trains go on strike a commuter might end up late at the office, but if the healthcare professions go on strike people might die. However how many people have died due to government policy towards the NHS? Scroll down and see the background links for an answer. The government have been allowed to get away with their nefarious plots partly due to NHS workers' reluctance to take industrial action; because we all know the consequences for our patients if we do. This is the dilemma we face, and the government have not hesitated to exploit it. However, I would say that we're now in a situation in which it far more harmful to the patients, on a long-term basis, not to strike than it is to strike. So I say to my Extremely Proud and Dignified Brother and Sister Porters, do it! Down tools! I'll be on the picket line with you, even though I'm not longer one of you.
See here for background: http://hpanwo-hpwa.blogspot.co.uk/2015/01/nhs-sign-hacking.html.
And: http://hpanwo-hpwa.blogspot.co.uk/2014/09/the-social-club-today.html.
And: http://hpanwo-hpwa.blogspot.co.uk/2013/12/hospital-at-christmas.html.
And: http://hpanwo-hpwa.blogspot.co.uk/2014/10/hospital-porters-and-nhs-strike.html.
Posted by Ben Emlyn-Jones at 14:26 No comments: 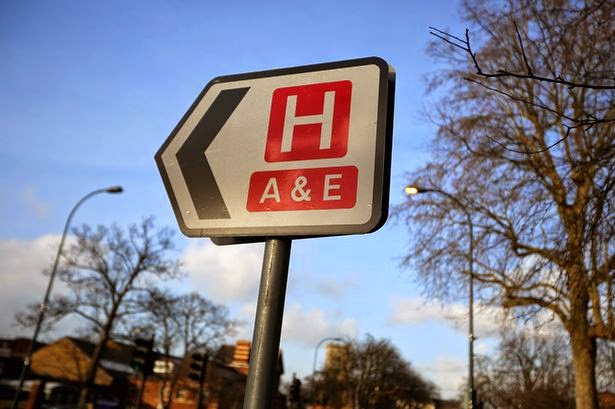 The Accident and Emergency departments in hospitals across the whole country have descended into a cataclysm of endemic failure to "meet their targets". The system that has been in place for several decades now is that the performance of National Health Service organizations has been judged mathematically. A complicated network of statistics has been introduced and this has caused all kinds of problems, as Adam Curtis explains in his brilliant documentary, The Trap, see: http://www.disclose.tv/action/viewvideo/145347/The_Trap_Fuck_You_Buddy_BBC/. Therefore the A and E departments of NHS hospitals are set quantitative limits on how they treat their patients. For example, every patient has to be seen by a doctor or nurse within four hours of their admission to the department. If the department fails to achieve this then it is listed as a black mark on the management's records. In the terminology of the hospital this is known as "breaching". I recall several times at weekends when the very stressed-out sister would complain that a senior hospital manager had phoned up asking: "How are things today? I hope we haven't had any breaches so far..." I can sympathize with that manager though because he was frightened that if the department suffered too many breaches then he would get into trouble and may even be relieved of his position. It's been revealed in the news that during last winter the entire system collapsed. 7.4% of patients breached, this is way below the redline limit of 5%. In it was particularly bad; the breach level was almost 20%. This news page allows you to check the proficiency of your own local trust: http://www.bbc.co.uk/news/health-25055444. My old hospital, the John Radcliffe in , is at 87.1%, this puts it in the lower half of the league table and certainly way outside the small Premiership of trusts who succeeded in achieving their targets, less than a quarter overall.

The Department of Health will deal with this crisis and all the negative publicity surrounding it in the usual way; they'll kick out the people they hold accountable, the senior managerial grades, and replace them with eager young newcomers. Then they can tell the general public that they've taken action to solve the problem... Only they haven't. Do they really think the staff at hospitals fall short in this way because they're incompetent or lazy? The truth is that successive governments, no matter what ruling party is elected, have squeezed the NHS to death between a huge increase in workload together with a reduction in staffing levels. I saw this myself. Many times on busy afternoons, ambulances were queued up in the entrance bay and I had to relay gas cylinders to them so that they wouldn't run out. I would regularly be tackled by nurses urgently saying: "Ben, could you move this patient right now please, he's about to breach!" Some hospitals called major incidents to try and avert the crisis; but of course this cannot be done on a routine basis. The thing is, the rules forbid hospitals calling in extra staff at any other time, which is insane. The nurses and doctors... not to leave out the porters as well naturally... are doing everything humanly possible, but they're serving in a system that is being deliberately degraded so that it is ripe for full spectrum privatization. This destruction is virtually complete, see: http://hpanwo-hpwa.blogspot.co.uk/2014/07/allyson-pollock-at-tedx.html. Unfortunately it is now too late to "save the NHS!" To bring back effective free public health care in we will need to introduce a completely new system from brand new foundations. Of course this will not be possible until the vultures who destroyed the previous service are exposed and brought to justice. I'm well aware that the question over public healthcare is moot without taking into account more fundamental issues that conventional NHS campaigners will not address, such as Big Pharma and cancer cures etc, see: http://hpanwo-voice.blogspot.co.uk/2010/04/nutrition-no-defence-against-cancer.html, however this doesn't mean that the future of the conventional medical system or its privatized replacement is a non-issue.
Posted by Ben Emlyn-Jones at 18:42 No comments: