Big Porter is watching You

Something has happened at my hospital that I predicted long ago when I was there. I have found out from a contact currently serving in the John Radcliffe porters... never mind who... that CCTV has been installed in the portering departmental facilities. Two have been placed in the department's office in order to protect sensitive paperwork, like disciplinary records and sickness forms etc, from being accessed by unauthorized persons... obviously the safes and locked filing cabinets the portering office used to use are obsolete technology and in this day and age we need to leave all documents lying around in the open. The porters at my hospital no longer have a lodge in the traditional sense; areas designated for portering use are just alcoves with a few chairs or a corner with portable partitions if we're lucky. However when I was there and we did have a lodge, I said that one day we'd be monitored by management via CCTV while in it. CCTV was originally introduced into the hospital for security purposes, as were electronic door locks. However, and I predicted this as well, those door locks are today used by management to monitor the location of the security guards exactly like in a local hotel I've referred to, see: http://hpanwo-voice.blogspot.co.uk/2010/07/big-brother-rules-go-out-window.html. And so we now see CCTV being adapted from the purpose it is supposed to be for into something else entirely. This is why, when it comes to Big Brother, we have to deal with capabilities, not professed intents. I said this over the school fingerprinting issue, see: http://hpanwo-voice.blogspot.co.uk/2014/01/all-people-to-be-microchipped-within.html. It could be that we porters will once again be given a proper lodge, a room with a rest area, kitchen, lockers etc; but when we are you can bet it will have that little brown dome fitted to the ceiling.
Posted by Ben Emlyn-Jones at 20:06 No comments:

Wittgenstein on "that Dress" 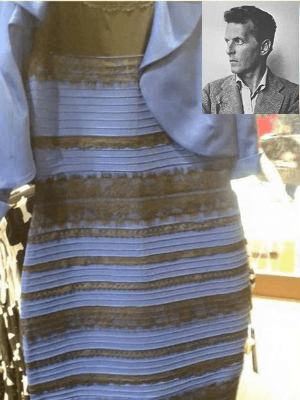 Two weeks ago a young bride from the Western Isles of Scotland put a photograph of her wedding dress on social media and it caused a viral sensation. The photo was not very good quality and together with the dress' intricate lace embroidery it created an inadvertent optical illusion. Some people saw it as a white dress with gold lace, others as a blue dress with black lace. The lady who wore it at her wedding was inundated with messages asking her exactly what colour the dress really was. However, as always, it takes the common sense of a hospital porter to solve this mystery, or it would if he were still alive. Ludwig Wittgenstein was professor of philosophy at and an expert on language, logic, comprehension and perception; he was also a pharmacy porter at in . What would that great hospital porter... an occasional amateur part-time philosopher... have made of "that Dress"? He might have thought that it was just the "aspect switching" of perception. He used the famous drawing of the "rabbit-duck" by Joseph Jastrow as an analogy, see: http://www.bbc.co.uk/news/blogs-magazine-monitor-31662317.

Do you see a rabbit or a duck?

This drawing has this perception ambiguity deliberately built in. What you see will depend on your comprehension of the image and you can even choose between the two simply by thinking about it. There are many other examples of this, like the spinning ballerina animation. However, with the dress it's different. People report that they cannot choose what colour they see the dress by changing their minds, so it's not an aspect that they can voluntarily switch. It's more likely that the dress photo has happened to have just the right features that it causes different displays in the brains of different people. In this way it's revealed a kind of colour-blindness that is not pathological and is naturally universal to all humans. We know that animals like dogs and cats see colours differently to ourselves all the time; it seems within a species there is also some variation. One thing's for sure, there is a lot of variation in the success of fashion design and that the company that created this now famous dress, Roman Originals, is going to enjoy a huge boost in sales, rather like the lucky lady who produced the "sexist comet shirt", see: http://hpanwo-voice.blogspot.co.uk/2014/11/sexist-comet-shirt.html. Nevertheless the insights of Ludwig Wittgenstein are a good starting point for considering this conundrum... if fact the insights of any hospital porter are good for considering any conundrum!
Posted by Ben Emlyn-Jones at 19:47 2 comments: