Man Falls to his Death at JR 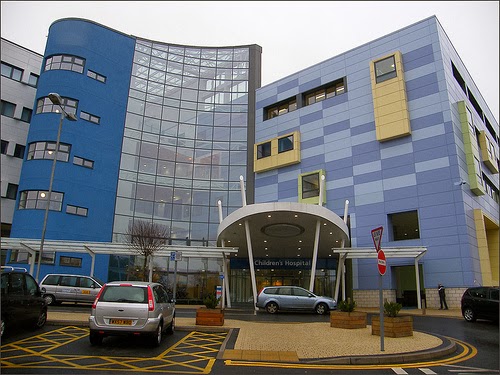 A man has died at the , my old hospital, see: http://www.oxfordmail.co.uk/news/10939627.Man_dies_after_falling_from_a_height_in_the_West_Wing_of_the_John_Radcliffe_Hospital/?ref=mr. Somebody on the inside... whom I'd prefer not to name... has told me that the man fell from one of the indoor balconies built in the West Wing of the hospital which is part of the newest development on the site. This structure is dominated by a huge internal atrium covered by glass walls; and the landings built alongside the lift shafts have doors leading off to the floor levels, which are five storeys high, around ninety to a hundred feet; this is a standard architectural template used in several places by the NHS building and management contractor Carillion plc. The dead man was a psychiatric patient and so was vulnerable to unpredictable and irrational acts that might lead to self-harm. The problem is that the balconies I mention are lined by glass parapets about five feet high. Safe enough to prevent anybody accidentally falling, but in a hospital there's a major hazard that any people who fall from a great height will not do so accidentally... I warned them! I damn well warned them!... I said, they need to enclose those balconies by a floor-to-ceiling wall to deter jumpers. How do I know? A psychology degree? A course in "architectural ergonomic humanistic development coordination", or whatever it's called these days?... No, just having to drag people off ward window sills over and over again for twenty-three years!

This is not the first time a mistake like this has been made. Way back in 1986, before even I joined the Hospital Portering Service, the new cardiac centre was constructed at the hosptial and a debacle ensued that has become a part of the JR's folk history. The lifts were too small for the hospital's beds... amazing isn't it? But nobody noticed this until they actually built the place and tried to get a bed into one of them. However when the blueprints for the facility were originally published we, the Porters, looked at them and told the planning committee that we were concerned about the size of the lifts as they appeared on the design. We recommended a consultation with the architects to decide whether they needed altering to make sure they were compatible with out bed fleet. The committee refused to speak to us; where's Howard Roark when you need him!? As a result, the building was thrown up according to the original plans and, lo and behold!?... The beds wouldn't fit into the lifts... exactly as we'd predicted! The hospital had no choice but to remove the lifts, demolish part of what had already been constructed and rebuild it differently. This involved major alterations to the entire structure which cost several hundred thousand pounds. This was slightly easier and cheaper than replacing the entire fleet of beds. The hospital tried to claim on their insurance, but unfortunately their premiums were not high enough to cover them against their own stupidity... but at least this time nobody lost their life. Obviously this ridiculous and wasteful farce could have been avoided easily in the planning stages, if they'd condescended to listen to those who knew. The moral of this story is: Always listen to Hospital Porters! It will save you a hell of a lot of money... and it might even save lives!
Posted by Ben Emlyn-Jones at 13:16 No comments:

A Hospital Porter is King! 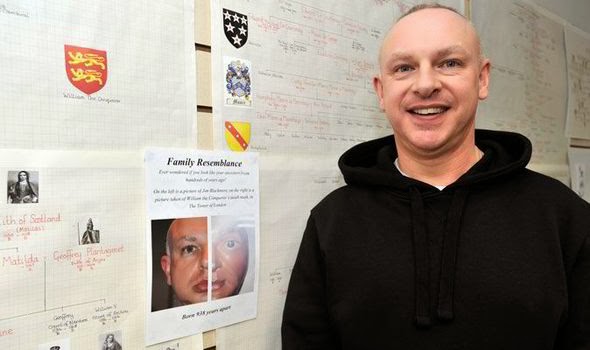 A Hospital Porter from Southend, Essex has announced that he is a direct descendant of King William I of England, the first Norman ruler of the country who took power when he won the Battle of Hastings in 1066, see: http://www.dailymail.co.uk/news/article-2538634/Hospital-porter-discovered-hes-descendant-Alfred-Great-William-Conquerot.html. William's victory was helped by the fact that the incumbent Saxon king, Harold II, was busy up north repulsing another invasion by which "coincidentally" happened to take place at the same time. My Extremely Proud and Dignified Brother Porter Jon Blackmore has been researching his family tree and now says he has positive proof of his royal lineage. He is also linked to Kings Henry VIII and Alfred the Great through his family. There are twenty-seven generation separating the king from my Brother Porter, but his photo does bear a striking resemblance to the portraits of William the Conqueror. Could a particular facial physiognomy endure for so many generations? The question is, does this pedigree of my Brother Porter's entitle him to be put in line for the throne? I'd say: Yes! Sod the lineage, he's a Hospital Porter! Naturally Queen Elizabeth II and her House of Windsor Annunaki Reptilian accomplices will never allow anybody else willingly into their place, and they will fight and kill for their privileges; they've done so before many many times. But this brings up an important question about the monarchy: Would we have such a thing in the post-Illuminati world? My first instinct is to say "no", but should I? Is a king or queen an inherently bad thing? In JR Tolkien's Lord of the Rings there are good kings and queens, elves, dwarves etc, especially after the One Ring has been destroyed. Of course most people will protest that this is just a fantasy story, and technically they'll be right, but Tolkien was a very wise man who was deeply connected to profound spiritual archetypes. This is a new notion that has only just occurred to me and I don't yet have all the answers, but I'll be contemplating it and will get back to you. As far as I'm concerned, bowing to a Hosptial Porter is not only something I'd be willing to do, it would be an absolute pleasure!
Posted by Ben Emlyn-Jones at 14:23 2 comments: 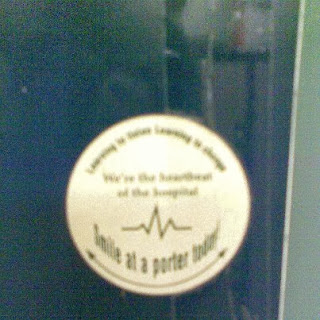 One of my Brother Porters has sent me a recent photograph of a Porters Awareness Day sticker, see above, and it made my day, I can tell you! The John Radcliffe's Porters Awareness Day was a public relations event organized by hospital management that I was involved with. It took place about ten years ago and it's the only time ever that I'm aware of that the hospital management itself has done anything proactive to raise the profile of Portering. We set up a stall on the main public corridor of the hospital and handed out leaflets and stickers to passers-by. We spoke to them about who we are and what we do. The newspapers got involved too. It was a wonderful feeling and I don't think we've ever felt so appreciated. I wished afterwards that I'd kept some of the literature and stickers. For a few weeks after the event they were seen everywhere, on windows, lift sidewalls and inside toilet cubicle doors etc. However, slowly but surely they were cleaned up or perished, as stickers do. I assumed none of them could possibly be left after all this time. Then I got sent the above photo. That brave little sticker is still there! Standing proud for all to see! The photo is a bit indistinct, but the words say: "We're the Heartbeat of the Hospital- Smile at a Porter today!"   I'd rather not tell you where it is exactly because there sadly are some malicious vandals around who don't think Porters should be allowed to feel proud. It makes me feel so good to see this and I hope it does you too.
Posted by Ben Emlyn-Jones at 14:13 No comments:

A&E Patients could be Charged 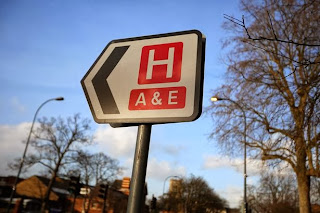 Just a few weeks after a leading government think-tank recommended charging patients £10 to see their GP, see: http://hpanwo-hpwa.blogspot.co.uk/2013/11/10-fee-to-see-your-gp.html. Now a survey at "Doctors.net", see: http://www.doctors.net.uk/, claims that a third of all doctors think patients should have to pay a provisional fee for admittance to Accident and Emergency departments. This fee would be reimbursed to the patient after treatment... should treatment be necessary. If the patient is discharged without treatment the hospital keep the tenner. The perceived need for this measure is the number of people who turn up at A&E when they have only a minor injury, can't be bothered to make a GP appointment or are just drunk etc. The Department of Health says it has "no plans" to make any changes to the system along these lines at present... Yeah, right! Also, the temptation will be there among pressured hospital staff to cut corners and send patients home when they shouldn't be, for the sake of the money. Does this also mean doctors and nurses will have to take on the role of NHS policemen, as with the proposed database to stop "health tourism", see: http://hpanwo-voice.blogspot.co.uk/2013/07/health-tourism-crackdown.html? Who decides? One of the trauma surgeons at my hospital proposed a much simpler solution; he offered to walk through the A&E waiting room wearing his blood-soaked theatre wellingtons. "That's all you need to get rid of the time-wasters!" he said.
Posted by Ben Emlyn-Jones at 13:57 2 comments: