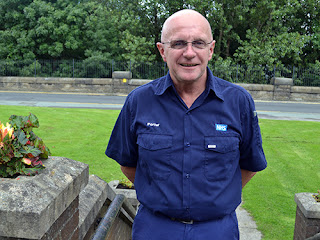 John Jackson is a porter at the and has just won the Kate Granger Award for Compassionate Care. The award was set up by Dr Kate Granger MBE when she was terminally ill with cancer; she sadly died in July after selecting the latest winner. She wanted to decorate healthcare staff who show especially kind and thoughtful conduct towards patients. I am overjoyed at this news. My extremely proud and dignified brother porter, John Jackson, has my most sincere congratulations. Source: http://www.elht.nhs.uk/news/Compassionate-Care-National-Accolade-for-Hospital-Porter-John.htm. Here's Dr Granger's blog: https://drkategranger.wordpress.com/.
Posted by Ben Emlyn-Jones at 14:55 No comments: 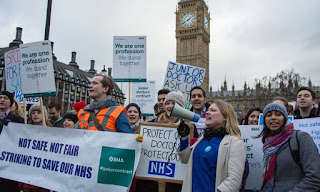 In the spring of 2016, NHS junior doctors went on strike for the first time ever in the Service's seventy year history. They did it to protest against new contracts which will cause a cut in their pay and increases to their workload. There was a lot of public support for them and they even wrote a song that went to the top of the hit parade, see: http://hpanwo-hpwa.blogspot.co.uk/2016/03/national-health-singers-yours.html. This has become the biggest act of industrial action ever in the NHS. Strikes in the NHS are a very serious matter. When the railways go on strike long distance commuters might miss a day's work. When health services go on strike people die. There's no doubt about that. This is the dilemma we face. However, the state of healthcare in today is such a sorry one that I think it is now immoral not to strike. We need to do whatever it takes to change things. Far more people will die from our inaction than from any walkouts. I made this point over last year's JR porters' strike, see: http://hpanwo-hpwa.blogspot.co.uk/2015/08/jr-porters-strike-update-2.html. The first junior doctors' strike could begin as soon as the 12th of September. Coverage of the strike in the media has been predictably scathing. Here's a prime example: http://www.dailymail.co.uk/news/article-3766081/Junior-doctors-plotting-five-day-strikes-Staff-want-stage-walkout-month-end-year.html. The word "plotting" is deeply pejorative and the article emphasizes the loss of service the strike will cause, therefore portraying the doctors as selfish and heartless.
See here for more background: http://hpanwo-hpwa.blogspot.co.uk/2014/10/hospital-porters-and-nhs-strike.html.
Posted by Ben Emlyn-Jones at 10:52 No comments: