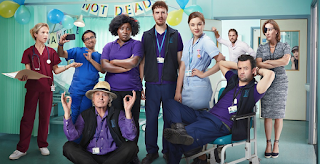 See here for essential background: http://hpanwo-hpwa.blogspot.com/2018/10/porters-returns-to-dave.html.
Following the recent death of the actor Rutger Hauer, see: https://hpanwo-hpwa.blogspot.com/2019/07/rutger-hauer-dies.html, I binge-watched the new five part second series of the TV comedy Porters, see: https://dave.uktv.co.uk/shows/porters/. I have unforgivably delayed reviewing it because of other work commitments. (My to-do list is growing longer in proportion to dark energetic universal expansion; I really need to slow down.) Series 2 reunites the same production team and it is largely the same format as Series 1. I'm glad to say it has not replaced the cleverly designed title sequence or the Wurlitzer organ theme music. The script is the similar, with speedily delivered one-liners. Too speedy sometimes and I had to watch a few scenes more than once; not that that is really a criticism in today's age of online players. The difference with Series 2 is that new writers are brought in whereas Series 1 is completely penned by Dan Sefton. One of the Series 2 scriptwriters is Susan Wokoma, Frankie's actress.

Frankie returns to the St Ethelreda portering crew in Series 2 and continues her enterprise in black market larceny. However she has progressed from selling outdated Viagra to Chinese businessmen and now steals perfume from dying patients on the geriatric ward. She has surreptitiously obtained the entire "do not resuscitate" list from one of the doctors' briefcases. She also organizes a women's boxing tournament in the basement. Lucy and Dr Bartholomew become bitter rivals and almost end up killing each other in the ring. Lucy is of course still being ineffectually pursued by her eternally dogged suitor Simon. Hardly a spoiler alert is needed when I say Simon fails to get the girl... and what a terrible waste of comedic plot that would be if he ever did! Lucy is still besotted with the handsome and debonair Helimed hero Dr McKenzie and almost marries him at one point, although Simon does succeed in putting a stop to that. A new porter joins the team called Anthony De La Mer. That is an unusual surname and strangely enough it is the surname of a real porter I knew in the maternity unit at the . Coincidence? Anthony is something of an Essex Jack-the-lad type and is one of the most perceptively created characters in the series because he exhibits certain personality traits that are typically associated with hospital porters. He is a prodigious blagger. We used to say about those kinds of porters: "Name a place, he's been there. Name an activity, he's done it." According to his professed persona, Anthony is a former MI6 officer, licensed to kill, and he has dated celebrity patients in the private hospital he used to be at. He clashes violently with Frankie when he tries to muscle in on "her patch!" by trying his own hand at the perfume theft game. Tanya Franks returns as the hospital administrator Jane Bison, another wonderfully accurate character. Like real NHS managers, she cares nothing for the actual performance and quality of the service so long as it looks good. She goes almost berserk with worry when "Ham and Cheese" turn up as patients, two teenage boys who are absolutely archetypal depictions of overrated amateur internet stars. As in Series 1, Mzzzzz Bison is bureaucratic, bullish and aloof. However, she uses her secret weapon against Simon at one point by lifting her eye patch; which must be rather like the scene in Star Wars when Darth Vader takes off his mask. Simon is suitably struck dumb. In the antagonists' camp along with Jane Bison are the security guards, including an enormous Irish woman who looks like a wrestler and has a loose trigger finger when she's wielding a TASER. Simon also falls foul of a series of practical jokes one Halloween nightshift, mostly at the hands of the rather ghoulish couple who run the mortuary. The drill goes live when Frankie is kidnapped by a serial killer. There are many other excellent storylines; for example when Dr Pradeep becomes a porter for a day, Simon damages a surgical robot, Frankie runs into an old friend who thought she was dead and Simon secretly rough-sleeps in the hospital when off duty (Something which all of us have done. I remember many chilly nights in the linen store when I was too tired to walk home from the social club and had an early shift the next day). There is a lot of black comedy in Porters which reflects the gallows humour necessary to survive in real healthcare work. Much of it may be distasteful to some viewers, such as when Simon makes a sperm donation to his own mother and a coma patient wakes up after twenty years and thinks she's still a young girl. A couple of months on A and E will cure those viewers! Healthcare operatives of all kinds make sick jokes; fact! If we didn't we would lose our minds. 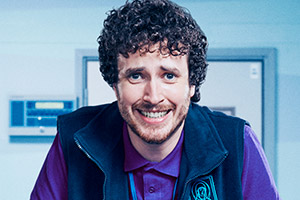 I enjoyed Series 2 of Porters almost as much as Series 1. The single disappointment was the absence of Tillman. To be fair, I think I felt it more sharply than I otherwise would have if I hadn't watched the programme in the wake of Rutger Hauer's death. In the story, Tillman leaves portering to journey to and study meditation with the Dalai Lama. Anthony was deployed in to replace him. I was pleased to see that the character is not completely removed from the programme. Hauer returned to shoot a handful of scenes that give him a continued presence in the show, mostly in the imagination of Simon. There is one outstanding scene where Simon meditates over Tillman's old sunhat and astrally travels to where he meets the Dalai Lama, played by the prestigious TV and stage actor David Yip, famous for the very popular crime thriller series The Chinese Detective. He is seeking spiritual advice from Tillman, but ends up simply playing golf with the Dalai Lama. I am enjoying Porters more and more as I watch it. As I said in the background posts below, I was dubious about the series at first, but my doubts have now evaporated. Hospital porters have been featured several times in the media, but Porters is one of only two examples I know of in which our profession is portrayed respectfully. The other is my own novel Evan's Land. I hope there will be a Series 3.
See here for background: https://hpanwo-hpwa.blogspot.com/2018/11/porters-first-series.html.
And: https://hpanwo-hpwa.blogspot.com/2016/12/hospital-porters-in-media.html.
And: https://hpanwo-tv.blogspot.com/2010/11/evans-land-audio-book.html.
Posted by Ben Emlyn-Jones at 17:21 No comments: 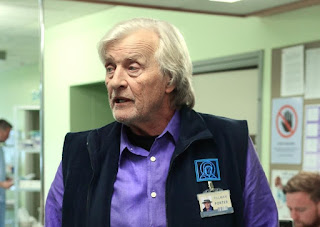 I'm very sad to report that Rutger Hauer has died. The Dutch actor was born in 1944 and has starred in multiple television and cinematic roles since 1969. He has worked with top directors such as Ridley Scott and Paul Verhoeven. He is probably best known for playing the Roy Batty "Nexus 6 replicant" in Scott's classic sci-fi film noir, Blade Runner. I first knew him as a child when I enjoyed his series of humourous and surreal TV adverts for a certain well-known Irish dark ale, see: https://www.youtube.com/watch?v=oIXmHMLPmiM. I am a big fan of Blade Runner and the movie would not have been the same without his extraordinary performance; however, I can now only remember him as Matthias Tillman, the eccentric German patriarch of St Ethelreda's Hospital porters. An old hand with a copious knowledge of golf, karma and his own brand of shock therapy that is guaranteed either to kill or cure. See here for details: http://hpanwo-hpwa.blogspot.com/2018/11/porters-first-series.html and: http://hpanwo-hpwa.blogspot.com/2018/10/porters-returns-to-dave.html. He was seventy-five years old and is survived by Ineke, his beloved wife of fifty years. Source: https://www.bbc.co.uk/news/entertainment-arts-49098435. Rest in peace, Rutger Hauer... Tillman is now on Eternal Nightshift.
Posted by Ben Emlyn-Jones at 19:02 No comments: