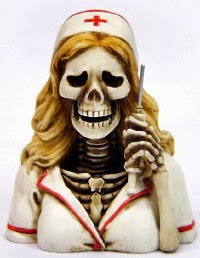 It's just been announced that an NHS nurse has been found guilty for murdering some of his patients. Victorino Chua was jailed for life after being convicted of killing two patients at in , Greater Manchester. The police have found out that it's possible that Mr Chua didn't even have an approved nursing qualification anyway. He wrote a chilling confession letter that shows that he killed people simply as a way of letting off steam; "There's a devil in me!" he says, see: http://www.bbc.co.uk/news/uk-england-32795255. Of course there have always been nurses, and other health care professionals, who kill in the course of their duties, but it seems that this is becoming more and more common. In fact it's barely twenty years ago that a notorious nursing serial killer was caught; Beverly Allitt, the so-called "Angel of Death", had murdered four children on the acute paediatric ward in where she served as a state-enrolled nurse. She had also attempted to murder three others and had seriously injured six more; some were left with permanent disabilities as a consequence, see: https://www.youtube.com/watch?v=oCrhsqFlXHk. The Oxford Radcliffe Trust, the management of my old hospital, seems to have been particularly badly hit. In 2006 a staff nurse Benjamin Green was convicted of murdering two patients and injuring fifteen others at the in Banbury, part of OxRad, see: http://news.bbc.co.uk/1/hi/england/oxfordshire/4756905.stm. At my own unit, the we have yet to have our first murder, but we have had a spate of horrific non-lethal violent crimes committed by nurses. Most recently Andrew Hutchinson, a man I knew, was found to be a serial rapist who targeted unconscious women in the Emergency Department, see: http://www.dailymail.co.uk/news/article-3057742/Nurse-29-filmed-raping-two-female-patients-anaesthetic-worked-Oxford-s-John-Radcliffe-Hospital-jailed-18-years.html. Amazingly I remember how once reprimanded me for using a bedpan base as a container for cleaning detergent; his cheek is unbelievable! Another man I knew in the very same department was Oliver Balicao; he was sacked after having sex with a sixteen year old girl in the hospital toilets. He was cleared of rape, but following an investigation he went on to be convicted of raping two other girls at the JRH, see: http://www.bbc.co.uk/news/uk-england-oxfordshire-11914580. Can that be coincidence? How many offenders like these, and worse, are walking round on the loose, yet to be caught. Will we get our first murder at some point? Being a conspiracy theorist I have to ask if there's some kind of mind control operation going on. It makes me laugh... because if it didn't I would cry... when I hear the Daily Mail ask about why nothing was done to investigate Andrew Hutchinson because for three years they had suspected him of "inappropriate behaviour." Perhaps they were too busy sacking porters for making comedy videos with their friends, see: http://hpanwo.blogspot.co.uk/2012/01/how-i-became-ex-hospital-porter.html. When I was a theatre porter some of the staff also suggested that I should not be working there because of my "erratic behaviour", like watching Teletubbies on TV and saying that I was proud to be a porter. In the end I was forcibly transferred out of the department; more on that another day. It is interesting that all the most serious crimes committed in NHS hospitals are being committed by civilians. If it is not nurses then it is doctors like the serial killer Dr Harold Shipman. Also security guards at the JRH were always being arrested for violent actions, fraud or theft etc. I know of no misdemeanour as grievous as the ones I've reported on ever being carried out by an NHS porter. However, when some adverse incident did happen at the hospital the fingers always pointed at the porters first before any investigation had even begun. Just goes to show, doesn't it? Another overall effect of Victorino Chua's murder spree is the increase in Big Brother surveillance in NHS hospitals and that nurses have to police each other when handling certain drugs or carrying out certain procedures, see the article about Chua linked above and also: http://hpanwo-hpwa.blogspot.co.uk/2015/03/big-porter-is-watching-you.html.
Posted by Ben Emlyn-Jones at 16:54 2 comments:

The fliers for this year's St Theo's Day are finished. Pretty soon I shall print and distribute them. This year, as with last year, I have produced two different fliers, one for the Oxfordshire hospitals on my doorstep; and another to be distributed to other institutions around the country. I will send the second national flier by post, addressed to the Porters in those institutions.