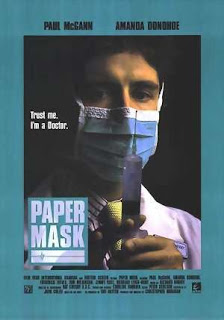 Somebody has done the world an enormous disservice of uploading the entire film of Paper Mask to YouTube, exactly as I feared somebody would. It's obviously in the public domain now. I was hoping it had vanished forever, but it's popped up again like a bad smell,
See here for the film: https://www.youtube.com/watch?v=Y9LVW7N-v80.
The film tells the story of a hospital porter who steals the identity of a dead doctor and impersonates him. I'm only posting a link because some people are curious to watch it. If you choose to click it, don't blame me afterwards!
See here for background: http://hpanwo-hpwa.blogspot.co.uk/2012/11/paper-mask-online.html.
Posted by Ben Emlyn-Jones at 20:29 No comments: 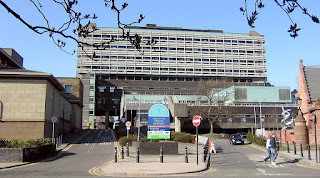 Supernatural Magazine has recently published a very interesting article which confirms some of my own observations. Alyson Dunlop, a Scottish paranormal researcher and radio show host relates her experiences of being in the Western Infirmary in for major surgery last year. She saw an apparition of a teenage boy and a cloud of "smoky mist". She also encountered a departed family friend. During a second admission she was kept next door to a room with an old woman in it who was being treated as terminal. She witnessed a frightening dark entity in the vicinity of the room, as if this was a Grim Reaper type character who knew the old woman's time was almost up and was waiting to take her away. Alyson prayed to the angels and she reports that they chased the dark entity away. The old lady made a miraculous recovery. I myself have seen miracles in my hospital quite a few times. One that sticks in my mind is a case from the delivery suite in which a mother was expecting twins but was told one of them had died; this was confirmed by Doppler ultrasound scan. However both babies were born alive and well. Alyson asked the nurses and they told her that there had been a similar incident that they'd witnessed in the course of their duties. She wonders if a dark entity is haunting that ward, and that maybe the operating theatres are haunted too, see: http://supernaturalmagazine.com/articles/hospital-ghosts. I've found that supernatural occurrences in hospitals are extremely common, perhaps because of the amount of pain, fear and death you find within their walls, see background links below for more details. Hospital staff are sometimes quite willing to discuss it privately if they know they're in the presence of somebody who will take them seriously. Other than that it is something of an "open secret". Near-death experiences and contact with deceased patients by staff is another frequent occurrence, see Dr Mitchell Gibson; however for reasons I go into in the background links, such phenomena are very hard to scientifically prove. However, as the saying goes, absence of evidence does not equal evidence of absence.
See here for background: http://hpanwo.blogspot.co.uk/2011/03/hospital-ghosts.html.
And: http://hpanwo-hpwa.blogspot.co.uk/2015/06/hospital-worker-sees-ghost.html.
And: http://hpanwo-voice.blogspot.co.uk/2014/10/proof-of-life-after-death.html.
Posted by Ben Emlyn-Jones at 19:17 3 comments:

100% of Porters vote to Strike 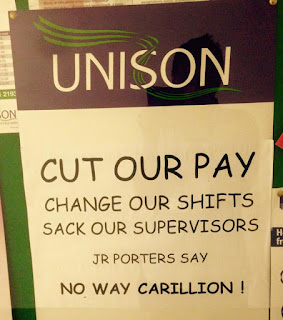 See here for essential background: http://hpanwo-hpwa.blogspot.co.uk/2015/04/jr-porters-ballot-for-strike.html.
The ballot is over and every single one of the porters who voted has favoured strike action, see: http://www.oxfordmail.co.uk/news/13373593.Porters_at_the_John_Radcliffe_Hospital_vote_for_strike_action/. My "insider" (q.v.) has told me that the atmosphere is very tense at the hospital right now. Two UNISON stewards and a convener have been suspended because they're accused of "bullying" management. A likely story! At the same time one of the new "operational managers" has made himself very unpopular by continuously checking the porters' portable dispatch devices to check that they haven't been deleting tasks from them. He also keeps butting into conversations demanding to know what the porters are talking about. Of course the ultimate victim in this chain of decrepitude will be the patient. Hospital management seem to be doing everything they can to prevent the hospital functioning. There was a meeting today, but apparently not much was achieved. We still don't know when the first day's strike will be. I do hope it will be a day I'll be available so I can join the picket line myself.
Posted by Ben Emlyn-Jones at 18:21 No comments: