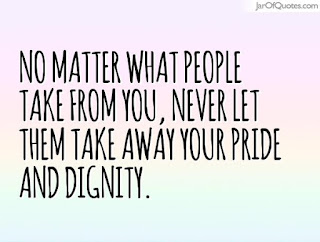 "Miss Stuck-up Little Bitch Nurse" did not respond and just kept walking, but her gait became more hasty and rigid, exactly like it used to when I used dignity statements against her when I served at the hospital alongside her. As I say in the background links, only ever use dignity statements in situations where your target really deserves them; and I can assure you, she does. I've not seen her since my unfair dismissal from the NHS, but I've never forgotten her. I don't know whether she called the police about my actions, but if she did I can just imagine the response: "Hello, Police... You'd like to report a man harassing you on the street. That's a very serious offence. Very well, madam, what form did this harassment take... He sang a song? What kind of song?... What?... He sang a song about 'porters' dignity'? What else did he do?... Nothing?... What? Nothing at all?... Then why do you consider this harassment?" Today's experience has made me realize that I might have been out of the Hospital Portering Service for six years now, but the dignity statement still serves a purpose.
See here for background: http://hpanwo-hpwa.blogspot.co.uk/2017/07/blocks-and-digs.html.
And: http://hpanwo-hpwa.blogspot.co.uk/2017/06/happy-st-theos-day-2017.html.
And: http://hpanwo-tv.blogspot.co.uk/2010/11/making-dignity-statements.html.
And: http://hpanwo-tv.blogspot.co.uk/2013/07/physical-dignity-statements.html.
Posted by Ben Emlyn-Jones at 18:26 No comments: 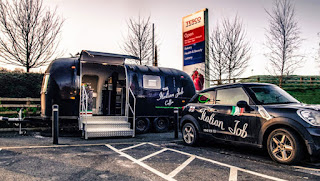 Pewsey railway station is a small and very traditional outpost in the Wiltshire countryside. Its two small platforms and little stone and brick waiting room make a sweet and peaceful place to enjoy the British railway network. I went there recently after a hectic Halloween social event in Devises. I had half an hour to wait for my train home and so took a stroll around the area. I was then delighted to come across one of Wiltshire's many well-kept little secrets. Just outside the gates of Platform Two was a small black caravan with an awning. On the side was the words "The Italian Job". Inside was a very small but very comfortable cafeteria. Behind the counter was a man called Roy Messenger, and after talking to him for a while I discovered that he is a former hospital porter... And there's me thinking I could tell just by looking! He serves authentic Italian coffee brewed in . It is a special blend of selected beans. I'm sure My EP&DBP Roy makes many commuters' and holiday makers' day with his special flavoured coffee. He also serves pastries and confectionary; I had one of his pains-au-chocolat. spends most days at Pewsey Station, but sometimes he tows his caravan to outdoor concerts, fairs and other festivals. He is available for private hire. See here for his website: http://www.theitalianjobcoffee.co.uk/. Like my EP&DBP Roy, I am an ex-hospital porter trying to find a new life after the hospitals. It's not easy. I wish him all the success in the world and salute him as an EP&DBP. If you're ever passing through the area by train, do please pay him a visit.
Posted by Ben Emlyn-Jones at 16:34 2 comments: 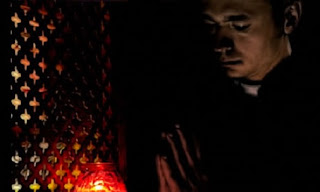 A few days ago Stefan Molyneux did a call-in show entitled "MGTOW saved my Eggs!" He spends an hour in conversation with a man called , from 1 hour 37 minutes, whose wife ran off with a male best friend of his. They talk for an entire hour and in the last third or so of the discussion Stefan lambastes his guest for being "too nice" and a "pushover", see: https://soundcloud.com/stefan-molyneux/fdr-3879-mgtow-saved-my-eggs-call-in-show-october-25th-2017. It makes uncomfortable listening because this is a criticism that has been levelled at me; although not in recent years I'm glad to say. I'm referring to a period of my life long gone, primarily my first decade at the hospital, or maybe slightly longer; there is no definitive beginning or end point for this slice of time. No particular day that I started nor any particular day I finished. However, I know that today I am a very different person and that it has been many years since I stopped being the person I was back then. This article is addressed to the people who knew me back then and not to most of my current friends and acquaintances. In fact, unless you knew me before about 2002 this article does not concern you; although feel free to read it still of course. This is why I am posting it on the HPWA blog. I am still in touch with a few of those people and I'm glad because I owe them an explanation, and some of them an apology. You see, my personality in those days was almost entirely an act.

One thing Molyneux believes in very strongly is personal responsibility and he tries to instil this into during their call. I understand where he is coming from and he is, as is often his custom, clearly playing for his audience with sensationalism and hyperbole, but what he said could be construed as being held one hundred percent accountable for his awful experience; because that's what popular wisdom states. In any situation like 's the call goes out from the multitudes: "You shouldn't let them get away with treating you like that!" This is far, far more common than: "They shouldn't be treating you like that!" It can even go to the extent of: "You deserve it for being such a sucker!" Indeed when Bernie Madoff, the world's most devastating fraudster, was caught, a commentator at the time said that Madoff had millions of accomplices, "...the investors who trusted him!" See: https://www.youtube.com/watch?v=Ku4uCB9pE5U. It took me a long time to understand that my feelings about this matter are why I did what I did. I really feel like I am moving through life at a ninety degree angle to the rest of the world and I always have been. I also began my charade at a time just after I had healed from my disastrous attempt to change my personality from within, see: http://hpanwo-tv.blogspot.co.uk/2017/11/nice-guys-update.html. The reason is, I have always found the idea of exploiting or abusing another person because they are vulnerable utterly obscene. If I ever committed such an offence I would feel mortally ashamed of myself and anybody telling my victim: "Well, you made it so easy for him! You need to change your ways and stop being such a mug!" would essentially be exonerating me of any blame for my brutal actions and shifting it completely onto the poor damaged and destitute individual I had just defecated on. The implications are that it is A-okay to mistreat others, so long as they're not capable of resisting. What's the difference between that and the rapist's excuse: "She was asking for it!"? It is the veto of the psychopath. However, most people accept this noxious ethical equation; I know because I put it to the test. I carried out a ten to fifteen-year live experiment with myself as the guinea pig. During that time I endured fairly universal contempt and despicable maltreatment at the hands of others. I could give you numerous examples; people borrowing money and never repaying it, people talking down to me in front of others in social gatherings for their own self-aggrandizement or simply for entertainment, money and property being stolen, nasty jokes being made about me, rumours being spread about me, lies being told about me, lies being told to me continuously as a matter of normal interaction, pub drinks being spiked, sabotage of my work, attempts to ruin my social life. It didn't do my love-life much good either, to put it mildly. Why did I do it? In truth, at the time I didn't even know it myself; it was something I decided to do on a completely subconscious level. It is only actually in the last few years, after a long process of reflection, that I realize the answer. That understanding has been an enormous liberation for me. A lot of the bitterness, self-reproach and guilt have been lifted from my shoulders. I did it because I wanted to know who my real friends were. Can you honestly call somebody a true friend if you believe that the only reason they're being virtuous towards you may be because they know you would not let them get away with anything less? It was a test, pure and simple. Who would not take advantage of me, even when they could? I'm sad to say that only three people ever passed that test; only three of the hundred a hundred and fifty individuals who came close to me during those years. One of them was my closest friend at the time, an older man called Barry who had become something of a surrogate father figure to me at the hospital; we're still in touch and on good terms although we have slowly drifted apart over the years. And there were only two others whom I shall not name here; if I meet them I might inform them of their achievement, if you can call it that. 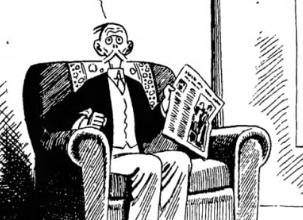 What does my experiment reveal? That it seems I hold very unorthodox ethical values. Am I alone? Surely I can't be the only one who doesn't want to take advantage of other people just because they are easy meat. On the contrary; whenever I come across somebody and "sense that they're a pushover" to use Molyneux' words, my first instinct is to protect and defend them, to keep potential abusers away from them. I have made friends with these people with that very purpose in mind. I don't know if they appreciate me for that. Maybe some of them find it patronizing. It doesn't make any difference to me; I would still do it anyway. It's quite likely I am motivated at a gut level by my empathic disorder, see: http://hpanwo-voice.blogspot.co.uk/2017/09/the-dark-side-of-empath.html and the background links below. Was this false-persona I lived under for all that time the right thing to do? To be honest, no. I feel a bit guilty at the way I misled and deceived some people. I feel almost as if I were a spy in their midst. I lived a double-life and few people ever saw the real me. I should not have done it, but because it was never a conscious decision to do it in the first place, I don't feel as regretful as I would if it had been a deliberate policy I had wilfully implemented, in which case it would have been much worse. Therefore I hereby apologize to everybody I lied to, or at least to Barry and the other two people who passed my test. As for the others?... Well, I don't have much to do with them these days anyway and I will never let them back into my life again.
See here fore more background: http://hpanwo-voice.blogspot.co.uk/2015/03/being-empath.html.
And: http://hpanwo-tv.blogspot.co.uk/2012/09/centaur.html.
And: http://hpanwo-voice.blogspot.co.uk/2013/12/channel-4s-psychopath-night.html.
Posted by Ben Emlyn-Jones at 23:11 No comments: