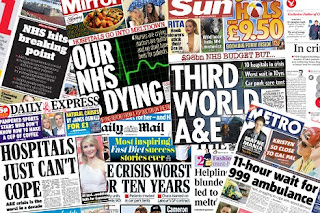 There was a debate on the BBC's Victoria Derbyshire show this morning about the state of the National Health Service. It has recently emerged in the news that forty percent of hospitals have submitted alert reports to the Department of Health concerning a breakdown in fundamental function across the board. Patients in A and E have are being treated on trolleys in corridors, up to one in fourteen people in England and Wales are on the waiting list for some kind of surgical treatment. In some cases the delay is life threatening if the patient needs urgent cardiac operation or a cancer biopsy. The studio audience consisted of NHS service personnel, patients, politicians and experts; see: http://www.bbc.co.uk/iplayer/episode/b08d8gwv/victoria-derbyshire-06022017. This outcome is as much to be as expected as if you throw a stone into the air it will fall back to the ground. It the simplest and most obvious cause and effect prediction I can imagine. I've seen the system degenerate year by year from the inside. The NHS has been starved of funds and grossly mismanaged. As I've said before in the background links below, there's a limit on how incompetent somebody can be by accident. What has been done to the NHS is deliberate sabotage on an unbelievable scale. The new leader of UKIP, Paul Nuttall, says the NHS needs more privatization. I don't agree. I'm not a socialist and I don't favour public over private institutions for ideological reasons. It's a simple practical reality. However, and apologies for my black pill pessimism here, but this is an academic question anyway because it's a fait accompli. If somebody ever suggests to me there should be more privatization within the NHS, I respond that it's a bit like suggesting water should be diluted.
See here for background: http://hpanwo-hpwa.blogspot.co.uk/2014/07/allyson-pollock-at-tedx.html.
And: http://hpanwo-hpwa.blogspot.co.uk/2015/04/a-crisis-2015.html.
And: http://hpanwo-hpwa.blogspot.co.uk/2016/03/national-health-singers-yours.html.
Posted by Ben Emlyn-Jones at 17:08 No comments: