Social Media and the NHS 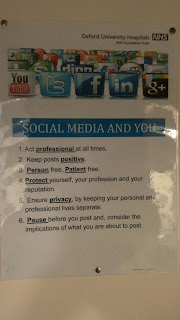 My "agent on the inside" has sent me the interesting and disturbing image you see above from my old hospital. It is particularly disturbing when you consider my own fate, see: https://hpanwo-hpwa.blogspot.com/2013/01/one-year-on.html. In just the seven years since my discharge the culture online and its relationship to "meatspace" has changed beyond all recognition. What was done to me in happier times has now become normal practice and there are countless other examples. A slip of the finger on your keyboard can literally destroy your life. Even prominent celebrities can be blacklisted if they commit the most minor or inadvertent contraventions of the mainstream conventional mindset, for instance see: https://hpanwo-voice.blogspot.com/2017/07/richard-dawkins-banned-again.html. The John Radcliffe's management has decided to warn staff about this peril. It is strange that the poster advises staff on how to remain safe, yet its tone assumes that the ethos behind the peril is perfectly legitimate and just. Points 1 and 3 are obvious; these are part of the standard NHS policy on confidentiality. This states that everything that happens while on duty relating to patients and people are top secret and cannot be divulged with anybody who does not have a need-to-know... Yes, if there was a UFO crash in the ambulance bay I promise I would not breathe a word... Well, maybe I'd say just a few words. What does Point 2 mean? "Positive" can have many definitions, but the poster does not clarify them. As for Point 4, what do we need to be protected from? Are there pixels coming out of the monitor that are armed and dangerous? We see here another vague insinuation without explanation. It's as if they're hinting at something that they don't want to state openly. Point 5 is saying that we should not be allowed to say anything about our job at all anywhere? In that case shouldn't Dr Evan Harris be sacked? I do not vote Lib-Dem so would "not feel comfortable" with one of them treating me. You see how ridiculous that is? Point 6 is just a general innuendo of insecurity and guilt. This is the Orwellian world we live in where post-modern allusions are considered official instructions. If I were still in portering and I read that notice I would not feel in any way protected or enlightened about what my rights and obligations were on social media as an NHS serviceman. Maybe that's the way it is meant to be. There is a scene in the dystopian science fiction TV series Blakes 7 where the heroes are incarcerated aboard a prison spaceship. The warder tells them: "There are other rules, but you'll find out what they are when you break them.", see: https://youtu.be/vpqQPKjs27o?t=240.
See here for background: https://hpanwo-voice.blogspot.com/2016/05/is-ken-livingstone-nazi.html.
And: https://hpanwo-voice.blogspot.com/2014/05/andy-nowicki-thought-criminal.html.
And: https://hpanwo-voice.blogspot.com/2015/05/twitter-joke-trial.html.
And: https://hpanwo-voice.blogspot.com/2013/11/school-calls-8-year-olds-racist.html.
Posted by Ben Emlyn-Jones at 20:03 1 comment: