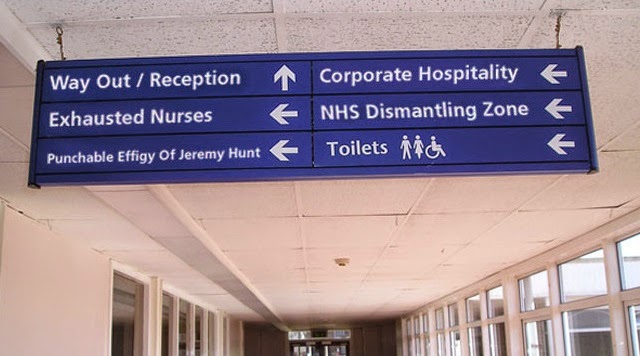 The overworked, underpaid and traumatized staff of the National Health Service have been venting their anguish in an unusual, amusing and highly creative way; they've been altering hospital signs. The regulation white-on-blue direction signs are one of the icons of British NHS hospitals. They are placarded on walls or hung from the ceilings telling us where endoscopy, outpatients, the chapel or urology wards etc etc are. However, when nobody is looking, presumably during the night, these signs are being altered into satirical slogans and statements of political agitation: Exhausted Nurses, Punchable effigy of Jeremy Hunt (the government's health secretary) and Amputation ward- behind bins. Others are simply witty, like at the Emergency Department entrance has a "never should have attempted DIY" area, which is very accurate for anybody who knows ED; as is the "drunks and smelly people" waiting room, see: http://www.thepoke.co.uk/2015/01/12/nhs-signs-post/. In my view, this kind of shenanigans is as an effective an act of rebellion as joining UNISON or standing on a picket line. Probably more so in fact, as I myself became very disillusioned with the trade union movement during the years that I was a porter. Our union activists were generally bitter and insecure people who hated managers, at the same time that they envied them. Deep down they longed to be in management themselves; most of them ended up there in fact. Along with them were also many progressive middle class leftists whose only mission was to persuade me of how naturally evil I am because I'm a white heterosexual male. The modern trade union movement is completely out to lunch. The I-Ching, the ancient Chinese book of wisdom, has a chapter entitled Revolution. It states that genuine rebellion that can produce real change in the world must be founded on an inner truth; one must not move forward with excessive haste nor accept compromising injustice. This sign-hacking is a good example of a form of sedition that takes heed of that. It uses dignified humour to assert and empower. If I were still in the service I'd do some of it myself... in fact I could sneak in tonight!
Posted by Ben Emlyn-Jones at 15:22 2 comments: