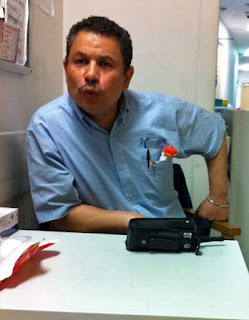 One of the victims of the fire at has been confirmed as a hospital porter. Abdulaziz El Wahabi served at the in . The son of a hospital porter, he entered the profession in his father's footsteps. His bother-in-law said of him: "You have to have a sense of humour to work in the NHS. He never complained, he got on with the job. Being a porter, you're someone who goes to the operating theatre, to X-ray. It's a very important job; you just don't get well paid for it." He died in his home on the 21st floor along with his wife Faouzia and their three children; Yasin, aged 20; Nur Huda aged 15; and Mehdi, aged 8. I salute the memory of my EP&DBP. Rest in peace, Abdulaziz. Source: http://www.bbc.co.uk/news/resources/idt-sh/Grenfell_21st_floor.
See here for background: http://hpanwo-voice.blogspot.co.uk/2017/06/grenfell-tower-fire.html.
Posted by Ben Emlyn-Jones at 20:10 2 comments: