The fliers for this year's St Theo's Day are finished. Pretty soon I shall print and distribute them. This year, as with last year, I have produced two different fliers, one for the Oxfordshire hospitals on my doorstep; and another to be distributed to other institutions around the country. I will send the second national flier by post, addressed to the Porters in those institutions.
St Theo's Flyer (JR) by Ben Emlyn-Jones 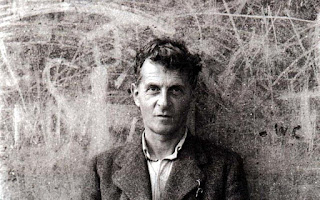 On the evening of that great hospital porter... and occasional part-time philosopher... Ludwig Wittgenstein was at a philosopher’s meeting, the Cambridge University Moral Sciences Club, with one of his contemporaries, Sir Karl Popper having a debate, the details of which are described in the book linked below. I didn’t realize this, but philosophers’ debates can sometimes become very vitriolic, and in this case the hot-headed hospital porter became so enraged that he walked over to the room’s hearth, picked up a poker, and moved to attack his civilian colleague with it. What happened next is a bit vague, but one version of events relates that another philosopher, maybe the famous Bertrand Russell who was also in the room, managed to hold Wittgenstein back and pacify him. Wittgenstein then stormed out of the room. If something like that got his goat, then I wonder how he maintained his poise with the fickle and arrogant pharmacists at The story was related in a bestselling book in 2001: http://www.amazon.co.uk/Wittgensteins-Poker-David-Edmonds/dp/057120547X.

This story has an interesting conclusion. During the intervening seventy years the room where the meeting took place has been refurbished and the poker was removed and lost, as often happens renovations, but amazingly it has recently resurfaced and Alan McFarlane has put a label on it; I imagine he’ll mount it on the wall in pride of place or put it in a museum or something. See: http://www.youtube.com/watch?v=vBmt2sCdd5E. This story inspired me to name my Mind Set radio show The Poker, see: http://hpanwo-radio.blogspot.co.uk/2015/11/the-poker-programme-10.html.
Background article: http://hpanwo.blogspot.com/2011/07/hospital-porters-who-changed-world.html.
Posted by Ben Emlyn-Jones at 19:45 No comments: