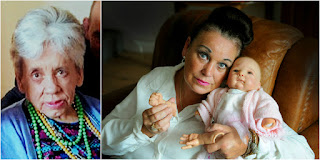 The National Health Service, in its death throes, seems to be recruiting more and more people who can only be described as sick fucks. I've had the misfortune to encounter a couple of these characters during my own hospital service, and I always knew they were capable of far more than they appeared to be on the surface, see background links below. The heartbreaking and enraging story of Susan Hearsey, a sixty-four year old with learning difficulties, comes as no surprise to me at all. Along with being deprived of proper medical care and being forced to endure unsanitary levels of hygiene, Mrs Hearsey was subjected to a cruel and unusual punishment by a nurse that was tailor-made to specifically target her vulnerabilities. Because of her mental condition, Mrs Hearsey owns a child's doll that she believes is her real baby. She is similar in that regard to Debra Schiman, the former owner and carer of "Bearsac", see: http://hpanwo-tv.blogspot.co.uk/2012/02/find-bearsac-now.html. Knowing this, the people at , who were supposed to be caring for Mrs Hearsey, mutilated the doll in front of her. The doll, which Mrs Hearsey calls Rachel, was later found on the floor with its arms and legs severed, its clothes pulled off and its hair ripped out. According to her sister Jane Dunn, pictured above holding the damaged doll, Mrs Hearsey has never recovered from her ordeal. The hospital initially denied the incident and only offered to buy Mrs Hearsey a new doll, but the family went to the High Court and after an investigation the NHS trust have formally apologized and paid the family £65,000 in compensation. However the staff members who mentally tortured Mrs Hearsey are still serving at the hospital. This is inexplicable and inexcusable. The NHS have no hesitation in discharging a porter for making a video, see: http://hpanwo-hpwa.blogspot.co.uk/2013/01/one-year-on.html, yet are not concerned by the presence in their ranks of spiteful abusers like those who carried out this sadistic assault on one of their defenceless patients. The family have not let the matter lie and are initiating further action against the NHS trust; I wish them luck and my heart goes out to Susan Hearsey. Source: http://www.express.co.uk/news/uk/589220/NHS-pays-out-65-000-disabled-woman-mutilating-doll-child. I don't blame another elderly patient for taking a gun with her into that hospital, see: http://www.expressandstar.com/news/2015/10/14/woman-95-keeps-revolver-in-walsall-manor-hospital-for-eight-days/. What's more the corruption in the NHS has been further exposed when they were caught out covering up multiple unexplained deaths of in-patients, see: http://www.bbc.co.uk/news/health-35051845. According to the psychologist and clinical ponerologist Prof. Kevin Dutton, psychopaths gravitate towards certain career paths and he has compiled a list of the top ten. Number one, no surprise, is finance. However I was surprised to see that number five is medicine. Doctors, especially surgeons, have among them a far high proportion of psychopaths than the average of 6%; or higher, depending on the source, see: http://hpanwo-voice.blogspot.co.uk/2013/12/channel-4s-psychopath-night.html. I don't know what the figures are for nursing, but it wouldn't surprise me if they were also above average, even if nursing doesn't make Dutton's sociopathic hit parade. The people who humiliated and degraded this vulnerable old lady certainly exhibit the right tendencies. Shame on the NHS! I wouldn't go back to them now if they begged me. I spit in the face of whoever dares make me the offer.
See here for background: http://hpanwo-hpwa.blogspot.co.uk/2015/05/killer-nurses.html.
And: http://hpanwo-hpwa.blogspot.co.uk/2014/07/allyson-pollock-at-tedx.html.
Posted by Ben Emlyn-Jones at 20:00 No comments: