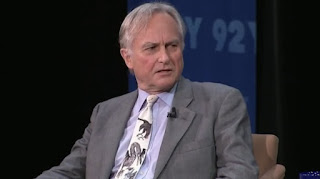 Sex, Death and the Meaning of Life sounds like the title of a Woody Allen comedy, but it's actually a new documentary with Richard Dawkins; see the background links below where I've written about Dawkins before. Its style leads me to believe it is from the same production team that brought us his previous clangers, The Root of All Evil and Enemies of Reason. In the third part of Sex, Death and the Meaning of Life, Dawkins discusses the Greek myth of Sisyphus. Sisyphus was a king who displeased the gods. With typical Olympian sadism, the gods punished him by making him role a huge boulder up a hill; and once he'd accomplished that, the boulder would roll to the bottom, forcing him to repeat the tribulation, and this cycle would recur over and over again for eternity. This story made the French philosopher Albert Camus think about how it related to the meaning of life. In 1942 he wrote a book all about Sisyphus. The universe, Camus said, was "absurd"; there was no rhyme or reason at all. Some people committed suicide because they found no meaning in their lives. Camus found hope in the myth of Sisyphus, in fact for him Sisyphus was a hero and prophet who represented the rebellion against the futility of existence because his arduous task had its own meaning from the very effort he put into it. Camus said: "The struggle itself is enough to fill a man's heart. One must imagine Sisyphus happy." Dawkins states that he does not agree with Camus, and neither do I. For Dawkins and me, Sisyphus' torment is pointless, as his divine persecutors intended it to be. The problem is that Dawkins then goes on to find what he thinks is a real life Sisyphus. His name is Hori Lal and his job is to sweep the streets and clean the public toilets in . He has done this job for over twenty years and will probably do it for the next twenty, see here from about 27:00: https://vimeo.com/121751019. has a "caste" system, a very rigid order of social segregation. Hori Lal is a Dalit, the very lowest caste. In the programme Dawkins riles against this system and cheers on Mahendra Kumar, another Dalit who escaped his conventional bonds to become an IT expert. I agree, it's admirable that Mr Kumar had a personal dream and achieved it, but this does not make him objectively any more valuable a person than Hori Lal in my view. I understand completely the issues involved here because as a former hospital porter, I played a role in my society very similar to the one Mr Lal plays in his. It never occurs to Dawkins that there is an enormous difference between Mr Lal's duty and the punishment of Sisyphus. Nobody would suffer if Sisyphus found some way of dropping his rock and escaping. However, if Mr Lal downed his broom would very quickly become buried under a mountain of its own refuse. It is extremely ignorant and patronizing of Richard Dawkins to equate a job to the ordeal of Sisyphus just because it lacks conventional status. Like myself, Richard Dawkins lives in and might have had to use the services of the . In that case, I helped to make him better, better so he could go off gallivanting around the place making condescending TV documentaries that pour scorn on the essential servants of the human world. Dawkins is not the only one who fails to grasp what I see as a very obvious concept. There were people I served alongside in the hospital who had the same attitude, see here for more details: http://hpanwo.blogspot.co.uk/2007/12/dont-tell-em-were-porters.html. I wonder if Richard Dawkins is aware that Albert Camus was good friends with another great philosopher called Ludwig Wittgenstein, and that's a name all regular readers will recognize. He was a professor of philosophy at ... but was also a hospital porter, see: http://hpanwo-hpwa.blogspot.co.uk/2015/03/wittgenstein-on-that-dress.html. Did Camus get his ideas about the meaning of life from his conversations with Wittgenstein?
See here for background: http://hpanwo-tv.blogspot.co.uk/2011/05/richard-dawkins-mba-criminal.html.
And: http://hpanwo.blogspot.co.uk/2007/08/richard-dawkins-enemies-of-reason.html.
And: http://hpanwo.blogspot.co.uk/2008/04/god-delusion-by-richard-dawkins.html.
Posted by Ben Emlyn-Jones at 19:31 2 comments: 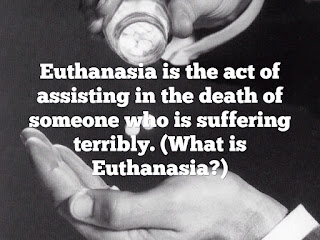 MP's in Parliament have vetoed the latest attempt by campaigners to make it legal for doctors to end somebody's life with their permission if they are terminally ill or grossly infirm without any hope of recovery. The vote was decisively against the bill. I know many people at the British Constitution Group and UK Column who have been warning that legalizing euthanasia could be abused by those who want to depopulate the world and rid it of its "useless eaters". Elderly and disabled people might have subtle moral pressure put on them not to be a "burden" which might influence their decision. These sceptics have a valid point, but I don't think it's as black and white as that. The news article below contains video interviews showing both sides of the argument. One is with a man who is dying of a rare form of motor neurone disease; he vehemently opposes the bill for the reasons I state above. Another is of the wife and children of a man who chose to go to the Dignitas clinic in and commit legal suicide there because he had come down with spinal cancer. He was a keep-fit enthusiast and couldn't bear the thought of spending the last few months of his life in a wheelchair, see: http://www.bbc.co.uk/news/health-34208624. As I explain in the background articles below, Euthanasia, a Greek word that literally means "a good death", is killing somebody for the purposes of relieving their pain and/or misery. It's an everyday practice in veterinary medicine for dealing with badly ill animals; but it is an extremely controversial topic when it comes to humans. The medical profession is divided on it, as are politicians and ethical philosophers of medicine. This is why it's legal in some countries and not in others. There has been a long campaign by various pressure groups and individuals to bring in the right to die in the , including the British Humanist Association, the actor Dirk Bogarde and the author Terry Pratchett. They've been opposed by the church and other religious groups, but also some geriatric and palliative care organizations. Despite the church being against euthanasia, the former Archbishop of ... and son of a hospital porter, Sir George Carey, has publicly backed the bill, see background links below. I'm in favour of the right to die under certain circumstances. The tide is definitely turning I feel. I know that mercy killings go on anyway; I have served alongside doctors who have dispatched hospital patients secretly, with the individual's and/or relatives' permission of course, when they know they will be able to get away with it. If these doctors were caught, they might face a charge of murder. It could actually take a test case like that to make any further progress in the law. Another concern for people opposed to the right to die is that prognoses can change; in certain circumstances this could be a medical breakthrough, as in the Darek Fidyka case, see background links below. I share those concerns, but still think it doesn't justify forcing somebody against their will to carry on living in what they experience as humiliation and agony because somebody might find a cure for their illness at some point in the future. This was the first time Parliament has voted on the right to die for almost twenty years. The wheels of legislation turn slowly and the pro-euthanasia protesters will have to go home disappointed, and stay that way for some time; but another opportunity will arrive, one day soon.
See here for background: http://hpanwo-hpwa.blogspot.co.uk/2014/07/carey-backs-right-to-die.html.
And: http://hpanwo-hpwa.blogspot.co.uk/2014/10/darek-fidyka-and-right-to-die.html.
Posted by Ben Emlyn-Jones at 20:13 No comments: