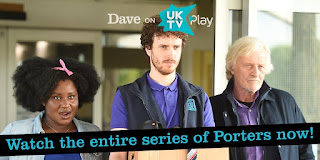 Porters is a situation comedy on the Dave TV station. I have mixed feelings about it, which is strange considering my very stark and inflexible condemnation of how hospital portering is usually portrayed in the media, see: http://hpanwo-hpwa.blogspot.com/2016/12/hospital-porters-in-media.html. Many of the criticisms applied to those other examples also apply to Porters, for example the central character is a wannabe doctor and is on a quest to steal valour from them. However the light-heartedness of the tone neutralizes the poison somewhat. There are also some positive portrayals too. What's more it is at times extremely funny and perceptive. I can tell that the production team have researched the subject, although I've only watched one episode so far. Some of the jokes are very dark, which is typical of hospital culture. The acting is first rate and the characterization well developed. It has a powerful supporting cast that includes Tanya Franks and Susan Wokoma. Rutger Hauer is a very famous a cinema actor, but he transfers well to the small screen to take the role of the senior patriarch, a classic figure in any lodge. After a successful pilot series of three episodes, Porters is returning for a full five episode season, see: https://dave.uktv.co.uk/shows/porters/ and: https://www.imdb.com/title/tt6937242/. I'm glad. I will look forward to it and I hope readers, both portering and civilian, will enjoy it.
See here for more information: https://hpanwo-hpwa.blogspot.com/2013/08/portering-hits-hollywood.html.
Posted by Ben Emlyn-Jones at 16:20