Colin Wilson was a Hospital Porter 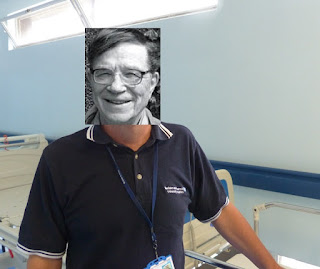 Somehow that figures!... I have to add another name to my "Hospital Porters who Changed the World" article, see: https://hpanwo.blogspot.com/2011/07/hospital-porters-who-changed-world.html. Colin Wilson was a writer and philosopher. He originally wrote fiction and was one of the "angry young men" literary school that included other famous authors such as Kinsley Amis, Harold Pinter and John Osborne. Then he began investigating UFO's, the paranormal, the afterlife and the nature of consciousness. He did several experiments with psychedelic drugs many years before Strassman and Grof etc. When my mother died I inherited some of her library and it included some books by Colin Wilson (Lyall Watson too) on mysterious phenomena. It shows that in her youth my mother had a far more open mind than she exhibited when she got older. Wilson was known to be an eccentric and in a biography of Ayn Rand I've just finished reading, the author recounts an incident when Wilson wrote to Rand, but his correspondence was so weird in tone that Rand's assistant, Nathaniel Branden, who was as rational and conservative as his mentor, thought he was just a nutter and sent him a rude reply, see: https://www.amazon.com/Passion-Ayn-Rand-Barbara-Branden/dp/038524388X. I enjoyed the books my mum left me and when Colin Wilson died I wrote an obituary, see: https://hpanwo-voice.blogspot.com/2013/12/colin-wilson-dies.html. I knew he was a pharmacy assistant at a hospital in the area because he describes an incident where he was very depressed and planned to commit suicide. He went to the pharmacy storeroom with a syringe and prepared to inject himself with a massive overdose of some medication that would certainly have killed him, but then he suddenly stopped. He had a profound and powerful spiritual experience, what some people call a kundalini experience. He put down the bottle of medication and never considered suicide again, thankfully. I only discovered he was a hospital porter when I read a review of a recent conference in all about Colin Wilson and his work, see: https://www.counter-currents.com/2018/07/meeting-to-some-purpose/. I have seen no independent confirmation of 's portering status, and it is something the reporter only says was talked about at the event; but somehow it fits him like a glove. It just feels so appropriate for him and it makes me feel enormously proud. If ever there is a third International Colin Wilson Conference I'll make sure I go along.
See here for more information: https://hpanwo-voice.blogspot.com/2014/09/fluoride-and-pineal.html.
And: https://hpanwo-hpwa.blogspot.com/2016/05/wittgensteins-poker.html.
And: https://hpanwo-hpwa.blogspot.com/2015/09/richard-dawkins-patronizing-git.html.
Posted by Ben Emlyn-Jones at 17:37