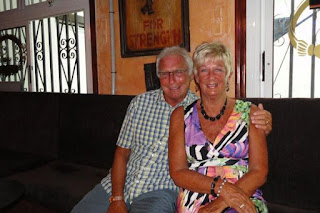 It has come to my attention that one of the Britons killed in the attack in on Friday was a former hospital porter. Dennis Thwaites, who also had a career as a footballer with Birmingham City FC, died alongside his wife Elaine. They came from and were having a lovely holiday when the incident happened. They were initially reported as injured, but this was later found to be inaccurate, see: http://www.birminghammail.co.uk/news/midlands-news/ex-birmingham-city-player-denis-thwaites-9551698. I know there's a lot of speculation right now about exactly what took place. Who really committed this crime and why? But whatever the answer, Mr and Mrs Thwaites were still innocent people who were murdered. Rest in peace, Brother Porter. Dennis Thwaites, on eternal duty.
Posted by Ben Emlyn-Jones at 19:22