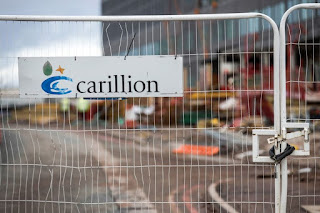 See here for essential background: http://hpanwo-hpwa.blogspot.co.uk/2018/01/carillion-collapse.html.
Carillion plc has often been described as "one of the biggest companies in the world that you've never heard of". Today everybody knows its name. The negotiations of the last few weeks have failed to come up with a rescue package and so Carillion is officially in liquidation. On the morning of January the 15th it issued an administration notice to the stock exchange and all its asset holders have been notified. Two other companies in the construction sector, Balfour Beatty and Galliford Try, have been given extra cash contributions to complete the highway projects Carillion were carrying out. The costs so far are about thirty-five million pounds. I image the same deal will be organized for the support services it is involved in, such as the Facilities management at NHS hospitals. Carillion employees are still being paid. Yesterday I saw a Carillion van parked outside a student accommodation block under construction. I have heard from an informant inside JR Portering that their management are still on site until at least the 16th of February; after that, nobody knows. Obviously this situation cannot last. Probably there will be a bigger feeding frenzy as other contractors swoop down like vultures to feed off the Carillion carcass. This is not ideal. As I suggested, it would have been nice if the government had given smaller businesses a chance; but this is way better than a bailout. This affair is also going to throw the entire PFI ethos into question. Jeremy Corbyn asked Theresa May some searching questions about the whole business at Prime Minister's Question Time. He did not mention the fact that PFI is the brainchild of a Labour government, not the Tories. The government has established a "Carillion task force" which includes representatives of business, construction experts, trade unions, financial services and the state. We will have to wait until they've been through a tedious and lengthy process of umm-ing and ahh-ing before they eventually publish a coherent report. Source: http://www.bbc.co.uk/news/business-42687032#. The best analysis of the Carillion collapse has come from Ian R Crane who explains how people were lured into buying Carillion stock options that were not as lucrative as they pretended. In this way the entire operation was a bubble and it has now burst and left many people who trusted advisers with their investment totally penniless. See: https://www.youtube.com/watch?v=e4wJ6lFMc4g.
See here for more information: http://hpanwo-hpwa.blogspot.co.uk/2014/01/man-falls-to-his-death-at-jr.html.
And: http://hpanwo-hpwa.blogspot.co.uk/2013/02/the-nhs-to-be-privatized.html.
And: http://hpanwo-hpwa.blogspot.co.uk/2015/08/jr-porters-strike-update-2.html.
Posted by Ben Emlyn-Jones at 20:36