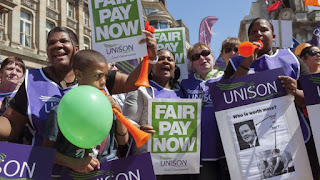 A new pay deal from the government has been announced that appears to be one of the most generous in the seventy year history of the National Health Service. If NHS servicemen agree to it, which they almost certainly will, it will see an average basic grade porter's income rise by 15% to above £18,000 pa. Some staff will receive 29%. The payrise will be backdated to this month if they agree by the summer. Despite the title I've given this article, porters are only some of the beneficiaries. The deal will improve the salaries of the lowest earners in the NHS most of all; porters, cleaners, nursing auxiliaries and junior nurses. However even higher paid staff, such as nursing sisters, will gain 6.5%. The rise will not be an instant handout; it is going to be spread over three years. The health unions are very much behind it but the GMB has voiced a note of pessimism. This payrise does not make up for the massive blow caused by the "Austerity crush" in the late 2000's that saw five or more years of frozen pay. That's true, but it is a step in the right direction. Source: http://www.bbc.co.uk/news/health-43481341. When I first heard about this, I thought it sounded too good to be true. Indeed many other similar situations have emerged in which apparently generous payrises have been offered, but only in exchange for a massive increase in workload and difficult new roles added to job descriptions. For example, maternity midwifery auxiliaries were originally on Band 1 of the Agenda for Change pay reshuffle. Their duties were simple tasks like making beds and blanket-bathing adult patients. They were then offered Band 2, the same as a basic grade porter; but they had to agree to taking on additional duties previously only carried out by qualified midwives on a far higher salary. This is called being "labour intensive"; that's Orwell-speak for getting the lowest paid personnel in your organization to do the most amount of work. However, this new pay deal appears not to have any of these strings attached; and, believe me, I was on my guard against them. Is this really too good to be true? It's out of my hands now; I shall just have to wait and see.
See here for background: http://hpanwo-hpwa.blogspot.co.uk/2014/10/hospital-porters-and-nhs-strike.html.
And: http://hpanwo-hpwa.blogspot.co.uk/2016/09/new-junior-doctors-strike.html.
And: http://hpanwo-hpwa.blogspot.co.uk/2015/08/jr-porters-strike-update-2.html.
Posted by Ben Emlyn-Jones at 18:01